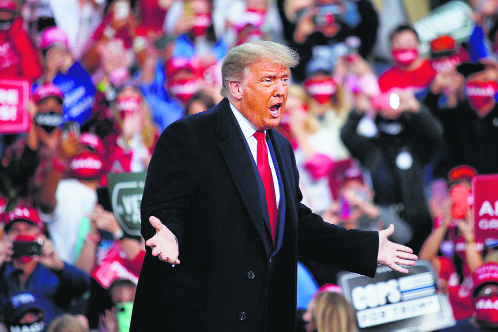 President Donald Trump has said he will next week nominate a woman to replace the late US Supreme Court Justice Ruth Bader Ginsburg, escalating a political row with the Democrats over her successor weeks before the presidential election.

Trump has announced a possible deal between Oracle and Walmart to share the US operations of Chinese video sharing application TikTok, which was placed on a ban list due to security concerns. The deal mandates the creation of a new American company — incorporated in Texas — and the prospect of 25,000 new jobs. TikTok will give $5 billion to fund the education of American youths.

Washington: The Trump administration has declared that all UN sanctions against Iran have been restored, a move most of the rest of the world rejects as illegal and sets the stage for an ugly showdown at the world body ahead of its annual General Assembly. This is 30 days after Secretary of State Mike Pompeo notified the council that Iran was in “significant non-performance” with its obligations under the accord, known as the Joint Comprehensive Plan of Action, or JCPOA. agencies

“I will be putting forth a nominee next week. I could say most likely it would be a woman. I think I can say that. If somebody were to ask me now I would say that a woman would be in first place,” Trump told supporters at an election rally in North Carolina on Saturday.

Ginsburg, a history-making jurist, feminist icon and a champion of women’s rights and social justice, died of cancer on Friday. She was 87. She was the second woman ever to serve as a justice on the nation’s highest court.

Trump said he is within his rights to fill the vacancy in the US Supreme Court, a move that has infuriated Democrats, who fear Republicans will vote to lock in a decades-long conservative majority on the country’s top court. “This has happened numerous times. There’s been many occasions where frankly it turned out to be during a presidential year,” he told reporters.

“I think we’re going to start the process extremely soon. We will have a nominee very soon,” he said, adding that there about 45 people on his list, but he does have a “short list” for potential nominees.

Democrats have vigorously opposed any nomination to the Supreme Court before the November 3 election, arguing that in 2016 Senate Republicans blocked the choice of Merrick Garland by Democratic President Barack Obama. — PTI