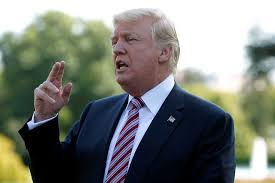 US President Donald Trump has refused to commit to a peaceful transfer of power if he loses the November 3 election to his Democratic rival Joe Biden.

Trump, a Republican, also said he believed the election result could end up in the US Supreme Court, as he again cast doubt on postal voting.

Many American states are encouraging mail-in voting, citing the need to keep Americans safe from the Covid pandemic.

“Well, we’re going to have to see what happens,” Trump said when asked whether he would commit to a peaceful transition, one of the cornerstones of American democracy.

“I have been complaining very strongly about the ballots, and the ballots are a disaster…,” Trump told reporters when asked about a peaceful transition of power after the presidential poll in November, irrespective of the outcome.

The US House of Representatives has passed a legislation that prevents import of goods made by Uyghur Muslims in the forced labour camps of the Xinjiang region in China.