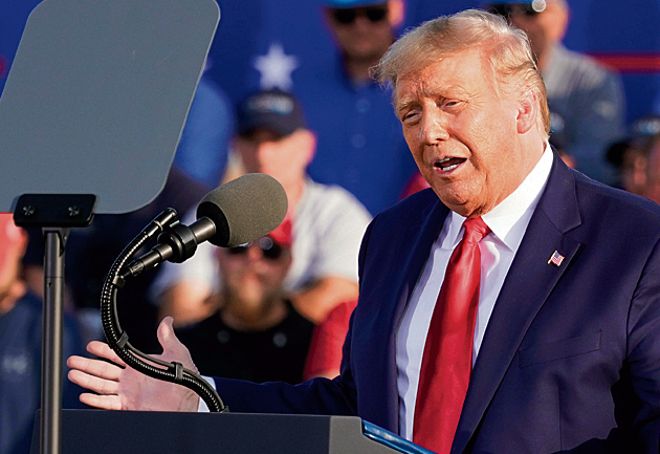 Former US Vice-President Joe Biden has enormously harmed the US economy in his five decades as a politician, President Donald Trump has said, adding that if the Democratic leader wins the November 3 poll it would be a win for China.

Biden, 77, and his running mate Kamala Harris are challenging incumbents President Trump, 74, and Vice-President Mike Pence in the presidential election.

Joe Biden spent the last 47 years shipping your jobs to China and foreign countries. I’ve spent the last four years bringing the jobs back to our country and back to Ohio. — Donald Trump, US President

“Joe Biden spent the last 47 years shipping your jobs to China and foreign countries. You know that. I’ve spent the last four years bringing the jobs back to our country and back to Ohio,” Trump said at a rally in Dayton, Ohio on Monday.

The Republican leader described the November 3 poll as the most important in recent memory. “On November 3, Americans will decide whether we lift our nation to soaring new heights of prosperity or whether we will allow Joe Biden — Sleepy Joe — to shut down our economy, impose a $4 trillion tax hike, abolish Ohio clean coal, oil, natural gas, and ship your jobs in factories overseas to China and countries that you never even heard of,” he said.

The democratic tax plans for the 2020 election lists a gradual increase in proposed taxes by $4 trillion in the next decade, placing a greater burden on the super-rich category.

“Put simply: If Biden wins, China wins. If we win, Ohio wins and most importantly, in all fairness, America wins. Because you finally have the president who puts America first, and I do put America first,” Trump said to applause from the audience. Trump has held election rallies in the last two weeks, notwithstanding the risks posed by Covid. Thousands attend the events without masks and breaking social-distancing norms. — PTI